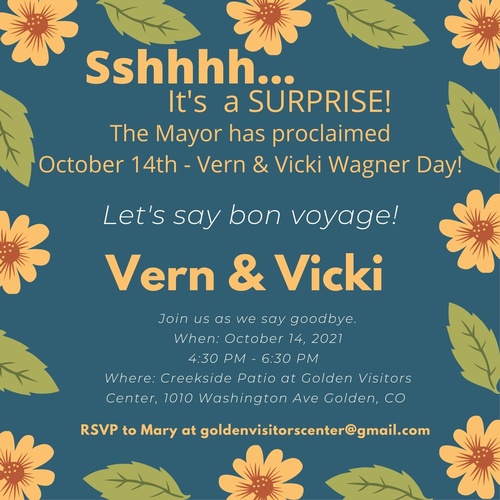 The Golden Civic Foundation, Golden Chamber of Commerce, Golden Visitors & Information Center and Mayor Laura Weinberg, have teamed together to recognize the impact of Vern and Vicki Wagner, Golden residents whose professional and philanthropic contributions have made a huge impact on the Golden community over the past 50-plus years. The pair will be honored on Thursday, October 14th with Mayor Weinberg’s official proclamation of “Vern & Vicki Wagner Day,” along with a tribute celebration from 4:30 to 6pm at the Visitors Center patio.

Friends, family and past and current colleagues from the Golden community are welcome to attend this private event but are asked to RSVP to goldenvisitorscenter@gmail.com.

“Volunteerism is a core Golden value and Vern and Vicki have led the way for decades,” said Mayor Weinberg. “The quality of a community is determined by the quality of its members’ contributions. These two have been involved in so many aspects of our Golden community and helped make the city the special place it is today.” The dynamic couple, who married in 1958, moved with their three children to Golden in 1968 when Vern, a U.S. Army veteran and power line construction lineman, accepted a can line mechanic position at Adolph Coors Co. Vern climbed the ranks and eventually retired from Coors as Director of Technical Services after a 28-year career. Also known in Golden as the “tractor guy,” Vern ran his John Deere in nearly every parade in Golden, often giving rides at events. For many years, Wagner and his tractor were in the annual Golden Christmas Parade and Buffalo Bill Parade and he was also given the honor of hauling the giant birthday cake in Golden’s 150th Anniversary Parade. Vern was also active with the Farmer’s Market for many years.

In addition to being “Mom” to their three children, Vicki, began her volunteer efforts with their children’s school activities and committees, Boy and Girl Scouts, and as a Sunday School Teacher. As the children grew up, she transitioned to serving on City boards and commissions including the Citizens Action Team, Golden Urban Renewal Authority, Leadership Golden, Golden Good Government League, Golden Visitor’s & Information Center and others. Her focus also included support for the business and events side of Golden including the Golden Chamber of Commerce and their Farmers Market, as an Auction “superstar” volunteer for the Golden Civic Foundation, on the hiring committee for the Golden Police Department and as “Chief Gardener” for the Visitors Center’s spectacular gardens.

The town of Montrose, Colorado will be the next stop for Vern and Vicki Wagner. They are leaving their beloved Golden community to live near their children and their families – to build a new community. They will be greatly missed in Golden but will, no doubt, make Montrose a better place.

Join us in saying farewell and celebrating all they have contributed to Golden!
Location:
Creekside Patio | Golden Visitors Center
1010 Washington Ave.